News from our Holy Archdiocese:The Episcopal Ordination of His Grace Bishop Iakovos of Miletoupolis 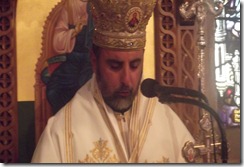 On Sunday the 20th of February 2011 the ordination to the Episcopate of Bishop-elect Iakovos of Miletoupolis was held in the Greek Orthodox Cathedral of the Annunciation of our Lady Theotokos, Redfern NSW. It was a historic day as His Grace Bishop Iakovos is the first Australian born person to be consecrated a bishop. 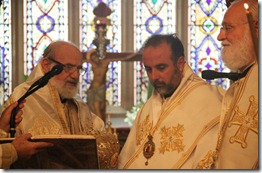 Theological College in Sydney of which His Grace is a graduate of. The ordination was presided over by His Eminence Archbishop Stylianos of Australia along with the co-consecrating hierarchs, their Graces: Bishop Ezekiel of Dervis, Bishop Seraphim of Apolonias and Bishop Nikandros of Dorylaeon and the assistance of six priests and two deacons.

His Eminence Archbishop Stylianos with great emotion and paternal love spoke about his spiritual child Iakovos and emphasised that he is an above-worthy(υπέρ άξιος) candidate for the high office of a Hierarch. His Eminence also thanked the Holy Synod of the Ecumenical Patriarchate and His All-Holiness Ecumenical Patriarch Bartholomew, for their reciprocation to his request in not only electing Fr Iakovos to the rank of a bishop, but also for giving Fr Iakovos the title of “Bishop of Miletoupolis” that he himself was ordained to and carried, prior to his election to the position of the Archbishop of Australia.

In attendance were many clergy, laity and distinguished guests who had travelled from all over Australia. In particular many faithful made their way from Melbourne and more specifically from the Community and Parish of Oakleigh were Bishop Iakovos had served as a parish priest. It was an immensely spiritually uplifting and emotional day which was filled with the Grace and presence of the Holy Spirit. This was felt throughout the whole service which was harmoniously and superbly adorned by the chanting of hymns from the great Feast day of Pentecost, by the 26 person choir which was formed by chanters from all over Australia. The spiritually awe-inspiring and moving moment came when all present knelt as the consecrating prayers and petitions were read by the co-consecrating hierarchs, followed by the chanted replies of the thrice Kyrie Eleison. 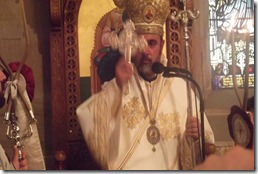 This was a memorable moment where heartfelt prayer and the descent and presence of the Holy Spirit united all. Reverberating in every ones soul were the words of the Kontakion which was panegyrically chanted by the hierarchs and clergy shortly before the Trisagion hymn “...When He dispensed the tongues of fire, He called all to unity, and with one voice we glorify the Most Holy Spirit.” This feeling was of course sealed by the emphatic cry of Axios by both clergy and laity, as His Grace the newly ordained Bishop of Miletoupolis was vested in hierarchical vestments by His Eminence and their Graces.

It was truly a day of Light and illumination for everyone. The feeling of many who were present both in body and spirit was indescribable. Yet one thing was clear that everything seemed bright. Perhaps the only way to express what was felt was only by affirming that “The Father is Light; the Word is Light; and the Holy Spirit is Light, Who was sent to the Apostles in the form of fiery tongues; and thus through Him all creation is illumined and guided to worship the Holy Trinity.” (2nd Exapostelarion of Holy Pentecost)

We take this opportunity to congratulate the newly ordained Bishop of Miletoupolis Iakovos. We wish him Eis Polla Eti Despota and affirm that he is thrice Axios. May our Holy Consubstantial and Life-giving Trinity through the intercessions of the Theotokos, St John the Baptist, St Iakovos the Brother of our Lord, Sts Anargyroi and all the Saints preserve and strengthen His Grace Bishop Iakovos of Miletoupolis in his new ministry.